Chris Botha, Group Managing Director of Park Advertising says that the future will be built by Wall Breakers, not Builders

There is something about Donald Trump that I admire. I don’t agree with some of his political views but what the man has done for social media and entertainment around the US Presidency, is well, unprecedented.

One of the promises he built his initial campaign on was the infamous “The Wall” between the USA and Mexico. Recently, the narrative around this topic has increased. Just a few days ago he tweeted this beauty which had the more liberal amongst us in hysterics.

Our world seems to be filled with two types of people. Wall Builders and Wall Breakers - and opinions are stronger than ever before. The battle for ultimate segregation or integration is more fervent than ever. 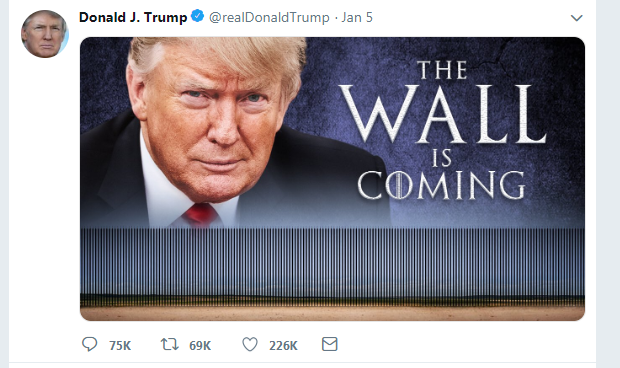 Wall Breakers in the communications industry are agencies integrating more and more services into their repertoire. Want an ad? We can do it. Want a website? We can do it. Want your shoelaces tied? We can do it. Need a frontal lobotomy? We know a guy. I really do believe the future agency will be modelled on this. A real one stop shop for clients, as long as it doesn’t lose the speciality skill.

Wall Breakers have realised that to offer clients only a small portion of the services they are after is limiting. From a business perspective, you lose the opportunity to integrate your services, and let’s face it, to make more money. The big danger they face is to become a “Jack of all Trades and Master of None”. The Wall Breakers who get to keep excellent skills in specialist divisions will be the ones to win the big game.

Then there are Wall Builders.

In some cases masquerading as “specialists”. I was recently told of a new media agency that only specialises in TV planning. Not strategy. Not buying. TV planning only. They’ve built a wall around themselves, and only do one thing. Apparently really well, but only one thing. Why does their future need to be limited? These are Wall Builders of the ultimate kind, who I don’t believe will last long.

Then of course there are the Wall Builders who believe that the client should have no direct contact with the media owners? How ridiculous! Media owners know more about their media type than anyone else, and have a better understanding of their viewer / reader / listener than anyone else would. So why build the wall? Let’s break it down.

Digital and Traditional media is of course another favourite. Whether you’re a client, copywriter, sales person or media planner, you cannot afford to build a wall around yourself. Walls need to be broken down, we need to learn, ask, and expose ourselves to as much knowledge as possible.

I am not sure whether President Trump will ever get that wall built. I hope not. It doesn’t solve the “problem” and it doesn’t advance his country. I hope in 2019 we all get our sledgehammers out, and start knocking down those walls.